LEARN TO LISTEN is the best advice I can give a young salesperson just starting out. And it’s also good advice for those who have made a lifetime career of selling. If you sell a product or service you still must keep in mind that what you are really selling is YOU. I found out that if I spent more time listening than I did talking I would learn a great deal about my customer and about myself. Who I was and what I was. In doing so I made an amazing discovery about myself. I learned that to one customer I was practically a father confessor. I learned that if I just let him pour out all his troubles of the past week on my shoulder, I was on my way to a sale. When I failed to heed that lesson I lost a memorable sale. Here’s the story. 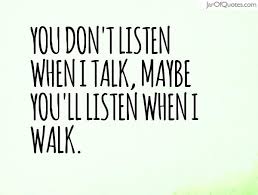 A well known contractor came in to see me. He was a self made man, with little formal education, who with hard work and goal setting had become quite affluent. I presented the product, a top of the line model with all the luxury options and took him for a demo ride. When I handed him the pen and order form he abruptly stood up and said “Mr. Girard, we’ve talked long enough”, and ended up leaving and not buying. At the end of the day I like to meditate on the day’s successes. That night I could only think about the big failure. I spent all evening trying to figure out what went wrong. Finally, as the evening wore on I could stand it no longer. I picked up the phone and called the guy. I said, “Look, I tried to sell you a car today, in fact I thought I had, and you walked out.” “That’s right,” he said. “What happened?” I asked. “Are you kidding?” he asked. “I want to be a better salesman than I was this afternoon. Would you tell me what I did wrong?”. “All right he said are you listening?” “I am all ears”. “Well, you weren’t this afternoon” he said.He then went on to tell me how he had just about made up his mind to buy from me and he was in that period of last minute hesitation before signing. To ease his own mind—after all, he was shelling out thousand’s of dollars—he had started to tell me about his son, Jimmy, who was going to the University of Michigan and studying to be a doctor. He was proud of his son and he mentioned all of the boy’s achievements and ambitions. As he told me about them in all honesty I couldn’t remember that he had said it to me that afternoon. I hadn’t been listening! He told me that I hadn’t seemed to care, that I showed no interest, that my mind seemed to wander once I thought I had the sale clinched. That was why he lost interest in me—because I had showed no interest in him other than as a guy with a checkbook.

I hadn’t listened to him other than when I had qualified him as to his wants and needs. But he had greater needs than just transportation—he had a need to be complimented on a son who was his pride and joy. That’s why he didn’t buy ME. Since I claimed that what I really sold was myself, it follows that what he was really buying along with the car was me. Frankly, I didn’t measure up that afternoon as an attractive product. When he finished I said, “Thank you for helping me. You’ve taught me a valuable lesson. I’m sorry I wasn’t listening this afternoon.” I told him I was proud too, to hear how well his son was doing, and that I knew with a dad like he had the boy would be a success. I said, “Perhaps the next time you’ll give me a second chance and buy from me”.

What did I learn from that call? Two things. First, I learned the importance of listening carefully and giving the customer my undivided attention. Second, that if I took the lesson to heart and learned from my mistake I could recapture the sale the next time when he came back.  There was a next time and he did come back to give me a second chance and buy from me, but in the meantime he had pounded home a valuable lesson I’ve never forgotten. Learning to listen is something every person needs to master if they want to sell themselves successfully. Everybody loves a good listener so make an honest effort to listen attentively to the other person.