October 1, 2020 by Joe Girard   Filed Under: Be Committed, Create a sense of urgency

Persistence means being a leader in your own successful life, not a follower. Don’t follow trails, blaze them. Of course, that means you’ve got to know where you’re going. A sign in my office reads: “The whole secret of life is to know what you want, to write it down and then commit yourself to accomplish it.” Early in my career I learned that mastering one’s way to the top can never be a part-time job. Half-hearted efforts get you nothing. Heading for whatever top you’re going after calls for a full time commitment and persistence. 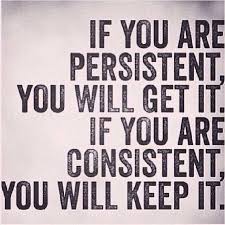 As I took the steps leading to success, I put forth not only a full time effort but overtime. Certainly there will be occasions when staying committed to your business or other goals will bring on periods of discouragement as well as moments of great satisfaction. It may often seem that for every two steps you take forward, you fall one step back. I know from personal experience that this can happen. But never dwell on a backward step, keep moving forward.

Be ambitious! Be tough! If you really believe you’re going to be successful, you will be, despite failures. Rarely do you learn from success. Every time you fail, you are forced closer to success. Fail enough times and the knowledge gained puts you in a very strong position to achieve success. A lot of this has to do with belief. I’ve always felt—even when I lost everything I’d achieved, which I did on a couple of occasions—that I was still going to be a huge success, that it was just a matter of time.

I mastered my way to the top by learning to use “won’t power” in a positive instead of a negative way. I started each day with affirmations like these:

Make every moment count for something. If you have a good day, don’t fall into the trap of “rewarding” yourself the very next day by slacking off. Do it again! Whatever you did worked! You’re doing something right! Be thankful. Learn from that experience. Hard work and persistence, sticking to the task you’ve set out to do, the task of selling yourself in more and better ways, is healthy. Hard work never caused the death of anyone. But, boredom, sitting around, wasting time, daydreaming and failing to push on and take things a step at a time are deadly. Whatever your goals or targets are in a workday, working smart, being persistent and staying focused improves your odds of achieving success!